In which we examine the consequences of inter-hominid romance. 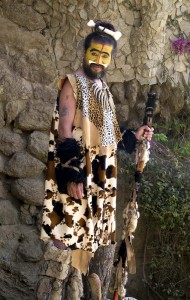 We all know that some people are better at metabolizing carbs than others: your friend Giacomo can eat all the pasta he wants without apparent damage to his waistline, while you put on 2 lbs merely looking at the plate.

Many explanations have been offered to explain this frustrating state of affairs. An article in The Economist (Feb.13th-19th 2016, A Parthian Shot, page 78) is bringing a new perpective to the topic: In a recent report to Science, a team from the Vanderbilt Genetic Institute found, among other things, that “Neanderthal DNA seems to put modern humans at risk of a specific sort of malnutrition caused by a lack of thiamine, a B vitamin that is vital for carbohydrate metabolism. (…) But that same genetic variant may also make it easier to digest fats.“

It has been known for a while that there was interbreeding between the homo-sapiens (us) and the now extinct Neanderthals (the big, hairy, heavy ones), and that 1% to 4% of the modern Europeans’ DNA is of Neanderthal origin. (For more on the topic see http://quantitativemedicine.net/2014/11/26/neanderthal-dna-in-humans/). It has been hypothesized that red hair or blue eyes are of Neanderthal origin. It seems now that Neanderthal genes carry more serious consequences.

Of course, such results must be interpreted with caution: it is already difficult to run a serious experiment on humans, let alone on Neanderthals. Such studies that only observe existing data can show correlation (Neanderthal DNA and lack to thiamine appear in the same people), but cannot prove causation (is Neanderthal DNA causing the lack of thiamine? Or maybe both these things are caused by a third factor). A definitive scientific experiment would involve a “double-blind” procedure, where both the tester and tested are kept unaware of the actual nature of the test, in order to reduce bias.

This is however an interesting enough result that it deserves some attention.

Carb metabolism is important because carbohydrates are linked to serious health problems. Just to cite a few:
♦ The nutritional value of carbs is low. Granted, they provide calories, but their micronutrient content is low.
♦Overconsumption of carbohydrates causes elevated blood sugar and elevated insulin levels.
♦ Chronically elevated blood sugar is responsible for glycation. Molecules produced by our body in presence of a lot of sugar will be defective. Glycation leads to small vessel diseases in the kidneys, eyes, fingertips, toes and brain.
♦ Chronically elevated insulin is bad in itself: insulin directly increases arterial stiffness, which leads to high blood pressure and atherosclerosis. Elevated insulin also clearly increases cancer risks.
♦ Elevated insulin impairs the action of glucagon, thus preventing the use of stored fat for energy. The excessive presence of carbohydrates in the blood shifts the body’s energy preference to burning sugar and impairs the burning of stored fat.

What was presented as a problem is in fact an advantage for those with Neanderthal DNA: since they can easily metabolize fats, it is easier for them to revert to a natural diet lower in carbs and higher in proteins and fats, thus limiting the dangers posed by the high consumption of carbohydrates that has become the norm today.